The Importance of Being Earnest made a welcome return to the West End at the Harold Pinter Theatre from 27th June to 20th September 2014. The fictitious Bunbury Company of Players put on the show, starring Nigel Havers and Siân Phillips, which made for an interesting re-imagining of the famous play. The production was directed by Lucy Bailey with design from Olivier Award winner William Dudley. Simon Brett joined as company writer to add his own embellishments to the production.

Martin Jarvis – John Worthing/Ernest‘s career covers the length and breadth of the entertainment industry. He is recently known for his roles in Miss Marple (2010) and Taking the Flak (2009), as well as penning two books (The Diary of a Theatrical Adventure and Acting Strangely). He is also a radio drama director and produces plays with his wife, Rosalind Ayres.

Nigel Havers – Algernon/Ernest is best known for playing Lord Lindsay in Chariots of Fire (1981), for which he received a BAFTA nomination. He is also recognised for his TV roles, notably as Dr Tom Latimer in Don’t Wait Up (1983 – 1990) and Lewis Archer in Coronation Street (2009 – 2013). He has recently appeared in The Life of Rock with Brian Pern (2014).

Siân Phillips – Lady Bracknell is most recognised for her role as Livia in the BBC’s 1976 adaptation of I, Claudius. She has since developed a prestigious career on the British stage, and has been nominated for Olivier Awards for Pal Joey (1980 – 1981), A Little Night Music (1996), and Marlene (1999) and Cabaret (2013).

Cherie Lunghi – Gwendolen is best known for her roles in British TV drama. She is perhaps most famous for playing Guinevere in the 1981 film Excalibur, as well as roles in The Mission (1986) and Frankenstein (1994). More recently she has appeared in When Calls the Hear (2013), Pat and Cabbage (2013), and Holby City (2014).

Rosalind Ayres – Miss Prism is best known for her screen work, appearing in films and TV series including Titanic (1997), Gods and Monsters (1998), Uncharted 3: Drake’s Deception (2011), and the BBC 1 series Outnumbered (2010 – 2011) in which she played Gran. She frequently co-stars in productions alongside her husband Martin Jarvis.

Lucy Bailey began directing after writing to Samuel Beckett as a plucky 20 year old, asking to stage his story Lessness. Since then she has worked at the Royal National Theatre, Glyndebourne Opera and the RSC. Her directing work includes Julius Caesar (2009),  A Winter’s Tale (2012) and Fortune’s Fool (2013).

William Dudley studied at St Martin’s School of Art and the Slade School of Art, and has since gone on to become a respected theatre designer. He has designed many productions for The National Theatre, Royal Court and various West End venues. He won a 1994 Olivier Award for Best Set Design of Hitchcock Blonde.

Simon Brett is a successful crime writer and has penned three series of detective novels, as well as several mystery plays. He has worked extensively at the BBC, where he wrote many episodes of I’m Sorry I Haven’t a Clue along with radio dramas for BBC 4. He also produced the first episode of The Hitchhiker’s Guide to the Galaxy. 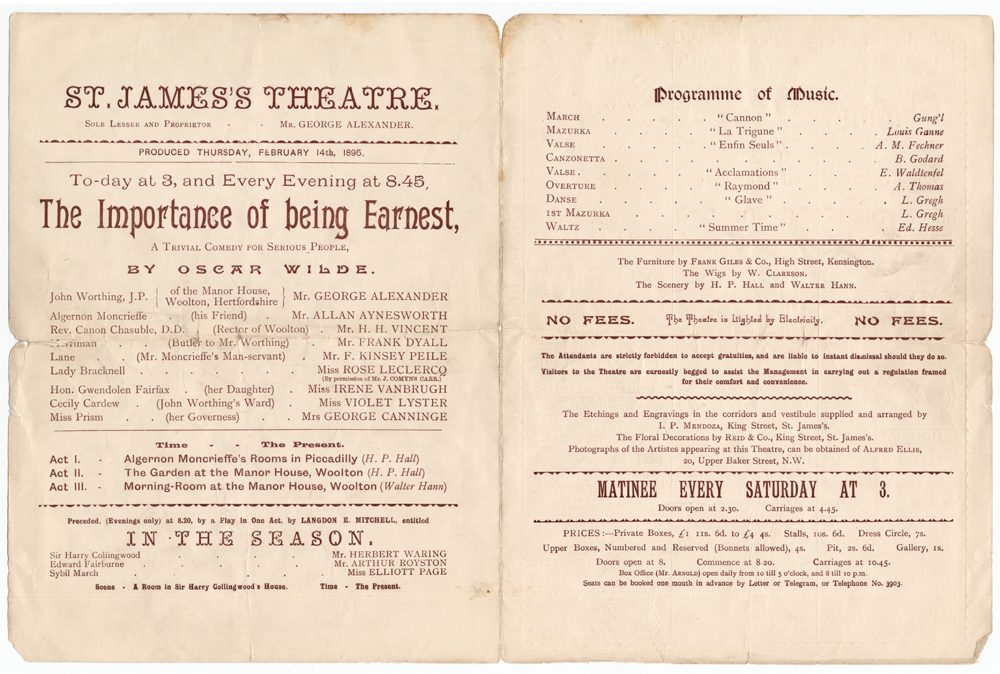 Directed by John Gielgud at the Globe Theatre London (now the Gielgud Theatre), this version has been described as the definitive production of the 20th Century. As well as having a cast packed full of famous names, the creative team was made up of newly found companies growing in their success. The production company HM Tennent LTD produced it and became known for working on stylish, exuberant shows. They had an office at the top of the Globe Theatre which made working on the production extremely convenient. Just three years before the show, The London Theatre Studio opened in Islington and was the first to have a dedicated theatre design course. The three women in charge of the syllabus formed the theatre design company Motley, and were responsible for the elegant set for The Importance of Being Earnest in 1939. Earlier productions in the 1920s and early 1930s had a minimalist design but Motley, under Gielgud’s direction, wanted to produce the play in the lavish Edwardian style that Wilde had intended.

Gielgud was equally loyal to the text and famously brought out Wilde’s lines in the best way, filling his cast with famous British actors of the time. This included Edith Evans as Lady Bracknell, Joyce Carey as Gwendolen, Angela Baddeley as Cecily and Margaret Rutherford as Miss Prism. Edith Evans’ famous delivery of Lady Bracknell’s line ‘a handbag’ is remembered today, and she went on to star in the 1952 film adaptation which cemented the character’s infamy.

It has been noted that Wilde’s lover, Lord Alfred Douglas, called on Gielgud following one performance to congratulate him on its success. He couldn’t comment on the original 1895 production, but interestingly claimed that he had been with Wilde as he wrote the play and had contributed some of the best lines. 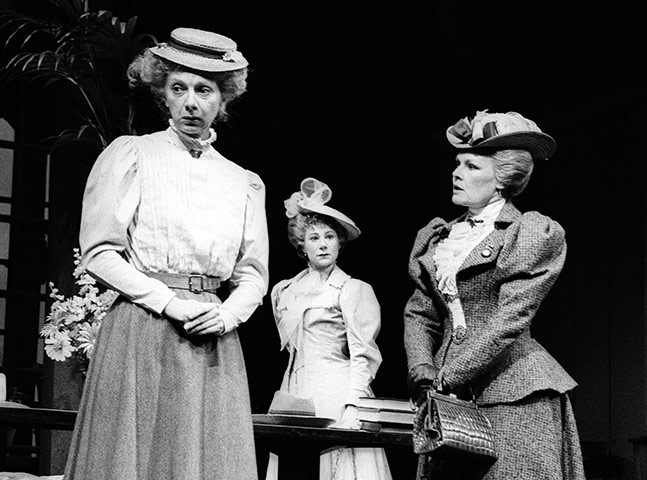 About the American Airlines Theater

The Roundabout Theatre Company produced a the 2011 Broadway revival of The Importance of Being Earnest, based on Brian Bedford’s 2009 production at the Stratford Shakespeare Festival. It was performed at the company’s permanent home, the American Airlines Theater in New York, an Italian Renaissance theatre on 42nd Street. The auditorium was beautifully renovated when it changed its name from the Selwyn Theatre in 2000 and has since hosted numerous Broadway revivals.

The director and cast

Brian Bedford directed the show as well as playing the strict Lady Bracknell; the role is often played by men, most recently by actors such as Geoffrey Rush and Ray Dooley. Bedford was praised for his strangely believable portrayal and his reluctance to play his gender for laughs. The production was nominated for three Tony Awards and was so successful that it was filmed and released on DVD.

Alongside Brian Bedford the cast were as follows: